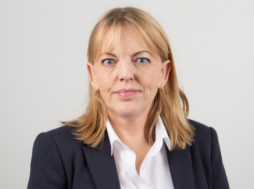 Alyson joined the Board in 2013 and is the Vice Chair. She also serves on the Audit, Risk & Governance Committee.

Alyson studied law at Queen’s University Belfast, the Inns of Court School of Law London and the College of Europe Bruges. She was called to the Bar of England and Wales in 1992. In 2008, she returned to the Bar of Northern Ireland. Alyson has extensive experience of litigation in the higher courts in a range of public law and human rights cases with a particular emphasis on cases concerning the protection of individuals rights.  Throughout her practice, Alyson has published extensively including legal textbooks, law reports series and encyclopedia of law and practice.

Alyson was a Commissioner on the Independent Commission on the Future of Housing in Northern Ireland, which made a number of recommendations.

She is Chair of the Board of the Simon Community Northern Ireland, and a member of the Strategic Operational Board of One Safe Place Justice Centre.

In January 2009, Alyson was appointed independent Human Rights Legal Advisor to the Northern Ireland Policing Board. In 2016, she was appointed special adviser to the UK’s Independent Reviewer of Terrorism Legislation.

Alyson is a Fellow of the RSA.